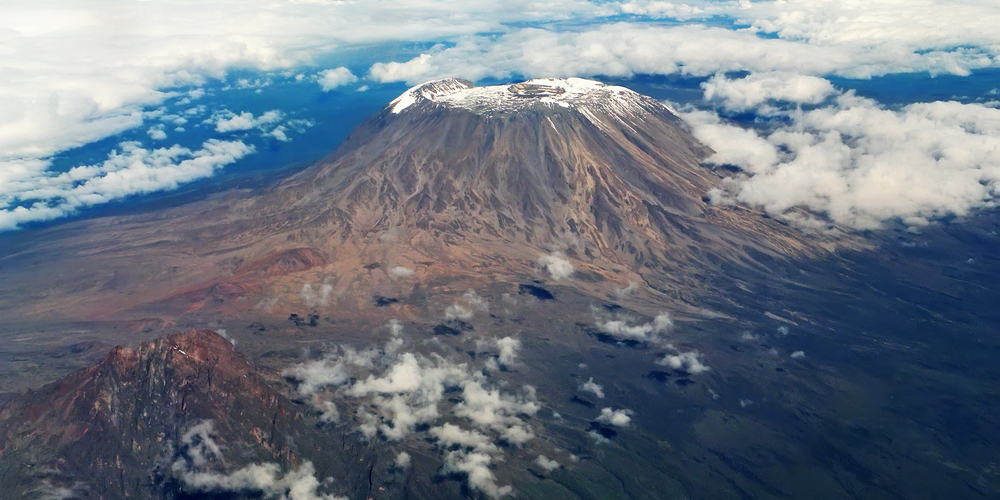 Mount Kilimanjaro stands at a staggering elevation of 19,345 feet. That is 3.7 vertical miles. As one of the seven summits, Mount Kilimanjaro is Africa’s highest peak . It’s also the tallest free-standing mountain in the world. Due to the mountain’s equatorial location as well as its high elevation, climbers can experience almost every climate type on earth during the journey to the top.

Kilimanjaro – the word means “shining mountain” in Swahili. The name is an appropriate one. When the sun’s rays hit the peaks of Kilimanjaro, the mountaintop sparkles with light. However, Kilimanjaro may not be a “shining mountain” for long. Based on scientific studies, the ice is melting at a rapid rate due to global warming. Most believe that the glaciers will be completely gone within 20 years.

Kilimanjaro, with its three volcanic cones, Kibo, Mawensi, and Shira, is an inactive stratovolcano. The highest point is Uhuru Peak on the volcano Kibo. The summit was first reached by the Marangu army scout, Yohanas Kinyala Lauwo, German Hans Meyer and Austrian Ludwig Purtscheller, on October 6, 1889. Kilimanjaro’s other peaks are extinct volcanoes: Mawenzi at 16,900 ft, and Shira at 13,000 ft.

Many consider Mt. Kilimanjaro to be the easiest of the Seven Summits because it requires no technical mountaineering experience and is a trek from base camp to summit. The biggest dangers climbers face on Kilimanjaro are altitude and weather, which can change unexpectedly. There are six official routes up Kilimanjaro.